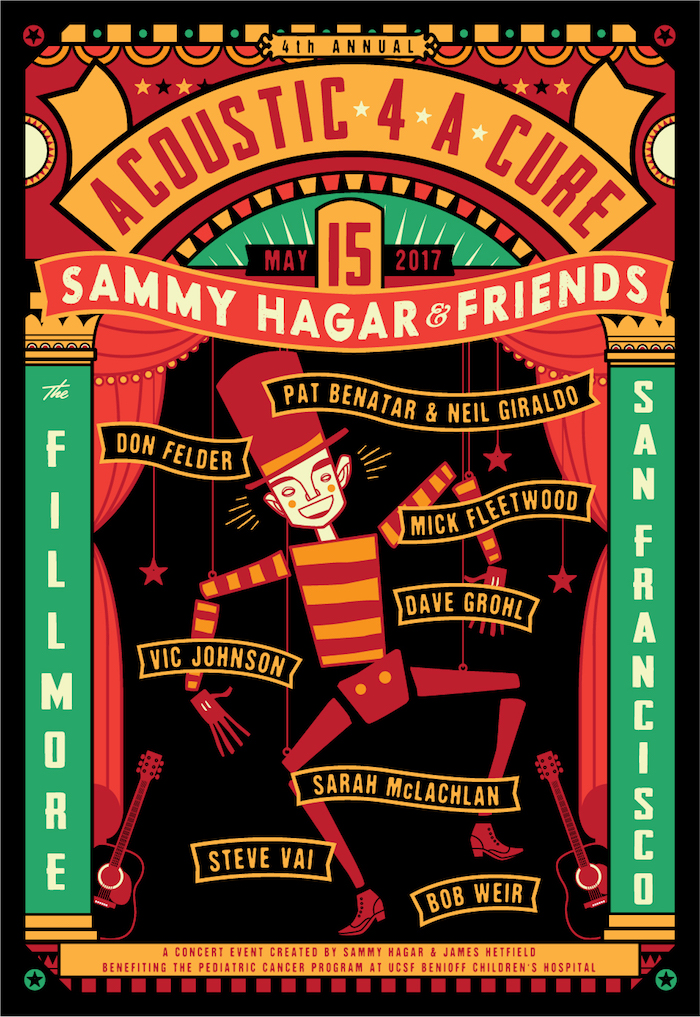 IT WAS AN INSTANT SELLOUT (THE QUICKEST IN A4AC HISTORY) - THANK YOU FOR THE AMAZING SUPPORT!


SAN FRANCISCO, March 27, 2017 - Sammy Hagar and James Hetfield today announced the line-up for "Acoustic-4-A-Cure IV," on May 15 at The Fillmore in San Francisco. Artists performing at Acoustic-4-A-Cure IV include (in alphabetical order): Pat Benatar & Neil Giraldo, Don Felder, Mick Fleetwood, Dave Grohl, Sammy Hagar, Vic Johnson, Sarah McLachlan, Steve Vai and Bob Weir. The 2017 concert blends veterans and newcomers to the event, with Dave Grohl sitting in for James Hetfield, who will be away on tour.

Tickets will go on sale Friday, March 31 at 10AM PDT via www.livenation.com. Tickets will not be available at The Fillmore box office, charge by phone or outlets. There is a two-ticket limit per customer.

Now in its fourth year, Acoustic-4-A-Cure has quickly become one of the year's hottest tickets, with legendary artists performing acoustic sets, epic collaborations and impromptu jams from the stages of intimate and storied San Francisco venues like The Fillmore. The benefit was created by Bay Area rock legends Sammy Hagar and James Hetfield, whose vision was to raise needed funds and awareness for the pediatric cancer research by throwing a must-see concert for fans and donating all of the proceeds to UCSF Benioff Children's Hospital. In past years, artists including John Mayer, Billie Joe Armstrong, Jerry Cantrell, Melissa Ethridge, Joe Satriani, Pat Monahan, Adam Sandler, Nancy Wilson, Linda Perry, Chad Smith, Vic Johnson, Tommy Lee and Kris Kristoferson have joined Hagar and Hetfield to rock the sold-out benefit concerts.

Tickets are priced as follows: $150 each for a general admission ticket which this year also include a commemorative t-shirt. A very limited amount of VIP tickets will be available at $500 each. VIP tickets include: Access to an exclusive VIP area to view the concert, an Acoustic-4-A-Cure t-shirt and poster, complimentary food & drinks, and more.

"From the moment the doors opened at the venue... more than anything else it felt like a great big party among friends." - The San Francisco Chronicle

PLEASE NOTE: In an effort to make sure that fans get the best tickets, this concert is a "will call only" event. Doors open at 6:30 PM and the concert begins promptly at 8:00 PM so we encourage guests to arrive early. All ticket orders over the 2-ticket limit will be subject to cancellation without notice. This includes duplicate orders having the same name, billing address, or credit card.

Each customer will need to bring their government issued photo ID and credit card used to purchase the tickets to the box office window on day of show to redeem the tickets. Once the ticket order is redeemed the customer must directly enter The Fillmore. All will call tickets must be picked up by the card holder. Alternate names for Will Call will not be permitted. You cannot leave tickets at will call to be picked up by someone else. No "drop-offs." Live Nation will cancel any and all orders without notice that exceed the ticket limit.

Thank you to all who made 2017 another amazing Acoustic-4-A-Cure! 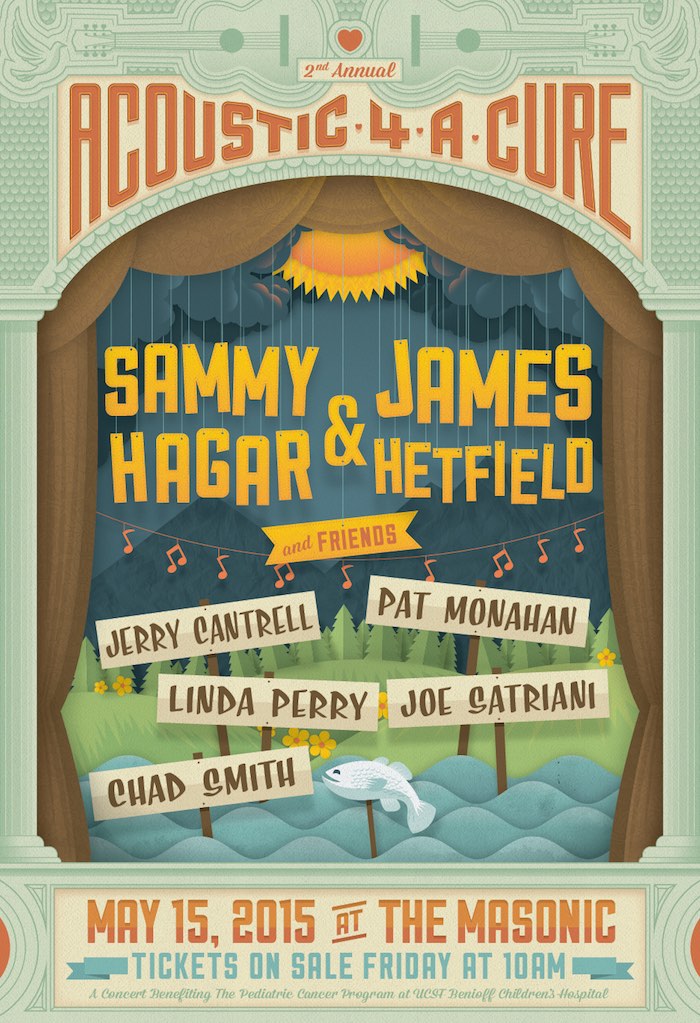 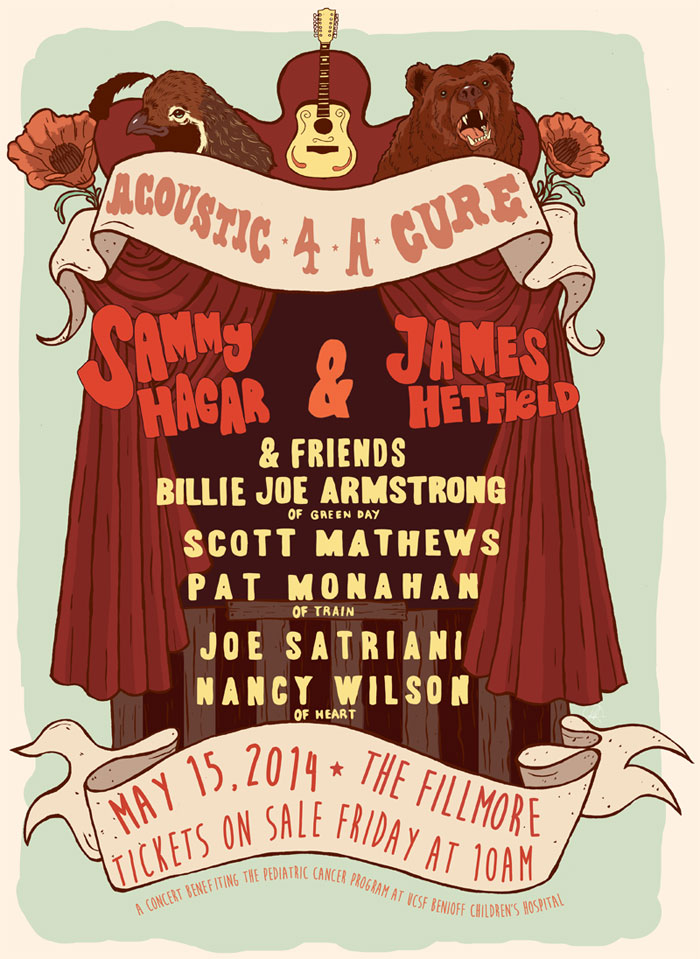 About UCSF Benioff Children's Hospital
UCSF Benioff Children's Hospital creates an environment where children and their families find compassionate care at the forefront of scientific discovery, with more than 150 experts in 50 medical specialties serving patients throughout Northern California and beyond. The hospital admits about 5,000 children each year, including 2,000 babies born in the hospital. http://www.ucsfbenioffchildrens.org/

About UCSF Medical Center
UCSF Medical Center is recognized throughout the world as a leading academic medical center that provides innovative treatments, uses advanced technology, fosters collaboration among clinicians and scientists, and employs a highly compassionate team of doctors, nurses and staff. http://www.ucsfhealth.org/